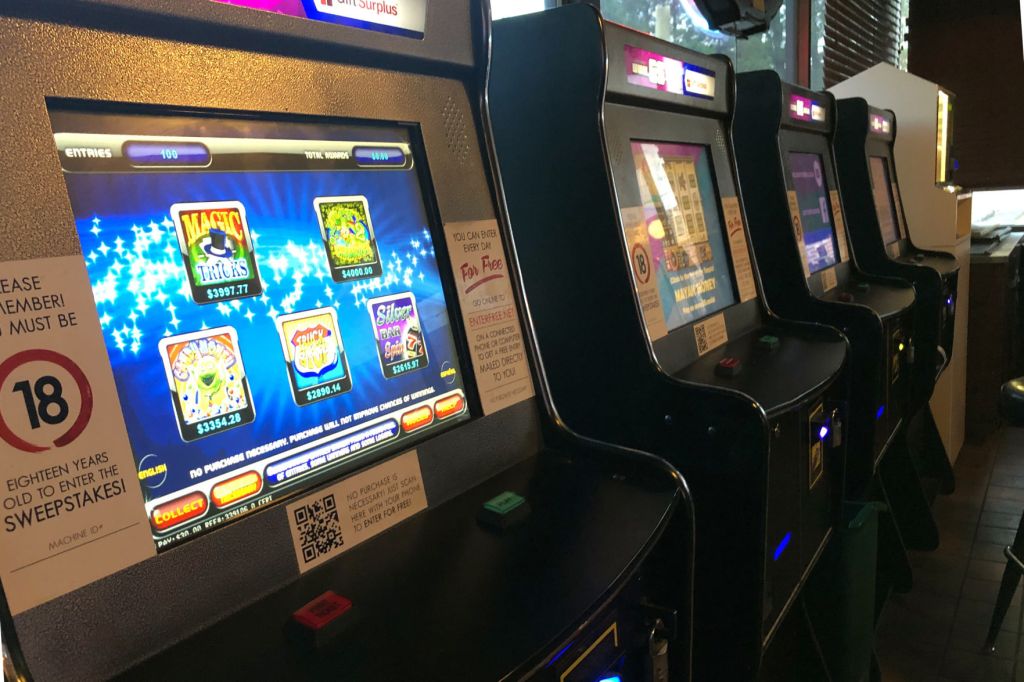 The following article first appeared in The Pilot on Sept. 18, 2019.

For the past six years, a Moore County businessman has been embroiled in a closely watched legal saga involving video slot machines.

Richard Frye, owner of Sandhill Amusements in Southern Pines, said he was surprised when the N.C. Court of Appeals on Tuesday overturned a 2017 ruling that found certain gaming kiosks, sometimes called sweepstakes machines, did not run afoul of the state’s gambling laws. The reversal will end a permanent injunction protecting businesses that operate the games.

The latest ruling, Frye said, is unfair to companies that market machines like the ones distributed by Sandhill Amusements. These suppliers usually share income with the restaurants, bars and convenience stores that house the machines.

“As far as I’m concerned, the court is wrong,” Frye said. “They didn’t follow the facts in the case or in all the many cases that led up to this final case, but there’s nothing I can do about it.”

The kiosks distributed by Sandhill Amusements are pre-loaded with slot machine games that allow players to win gift vouchers, which can be redeemed for cash or online prizes.

After determining the games were in violation of state law, sheriff’s deputies began seizing kiosks from businesses across Onslow County in 2013. Sandhill Amusements later sued the state and the Onslow County Sheriff’s Office. The N.C. Supreme Court ruled against the company in 2015.

Gift Surplus, the Arizona company that developed the kiosks’ software, then added features to give players more control over the games’ outcome. Finding that the updated games relied more on “skill and dexterity” than on chance, Superior Court Judge Ebern T. Watson III ruled in favor of Sandhill Amusements in 2017.

The recent appellate decision was issued with separate opinions from three judges, each of whom cited different reasons for tossing out the lower court’s ruling. With the injunction vacated, law enforcers will be free to seize Gift Surplus kiosks from businesses and to impose fines on people caught playing the games.

State gambling laws are enforced by the Alcohol Law Enforcement division of the North Carolina Department of Public Safety. Erin Bean, special agent with the division, said ALE will not immediately begin cracking down on the machines.

“While the Court of Appeals issued an opinion (Tuesday), the court’s mandate, or official notification to the clerk of court of the opinion, will not occur until Nov. 4,” Bean wrote in an email. “ALE will continue to monitor this case and will take enforcement action as authorized by law.”

Frye said Sandhill Amusements will remove all of its Gift Surplus-branded machines from businesses before the court’s mandate goes into effect.

“There’s no real recourse for us at this point,” he said.

Caught in the Middle

Frye believes Sandhill Amusements was an innocent casualty in the state’s war on sweepstakes parlors, establishments he views as little more than clandestine casinos.

“What the state really wants to do is get rid of the big sweepstakes rooms, and my company doesn’t do those,” he said. “I’ve never owned a game room. I hate the game rooms, quite frankly.”

As the president of Entertainment Group of North Carolina, an organization that lobbies for the amusement machine industry, Frye has advocated for legislation banning sweepstakes parlors.

“We tried to get a bill passed to get rid of the game rooms, because that’s the major problem,” Frye said. “Everything they’re running is games of chance, and it’s highly illegal. They’re the big outlaw in the business, and I knew that if we got rid of them, then we had an opportunity to stay on the street in small, limited numbers.”

“The only way (the state) could get rid of the big game rooms was to get rid of everybody, so they shot us down,” he said, adding that many sweepstakes parlors have been “hiding behind” the injunction granted to Sandhill Amusements. “Now that the injunction is gone, I would say the game rooms are probably all going to be gone within 30 days.”

In one of the three written opinions issued on Tuesday, Judge Hunter Murphy said it is irrelevant “whether chance or skill predominates in the current iteration of Gift Surplus’s sweepstakes.” The statute relating to sweepstakes machines, he wrote, “explicitly proscribes sweepstakes conducted through electronic display, which is ‘visual information, capable of being seen by a sweepstakes entrant, that takes the form of actual gameplay, or simulated gameplay[.]’”

“The trial court erred in concluding Gift Surplus’s sweepstakes do not violate (state law) because the sweepstakes in question are run through the use of an entertaining display,” Murphy wrote.

Frye, who rarely gives interviews, has been in the vending business for nearly 40 years. He started out with coin-operated Pac-Man and Donkey Kong games in the early 1980s.

“They were minting quarters,” he said. “It was very lucrative for several years.”

Demand has since waned for traditional arcade cabinets, and many manufacturers are increasingly focused on high-end golf and bowling machines that offer more immersive gameplay. These machines, Frye said, typically cost between $6,000 and $7,000.

“They’re terribly expensive, and at 50 cents a shot for players, it’s hard to recoup your investment,” he said. “It’s gotta make double what it’s worth because you’re splitting income with the location, and I’m not going to invest in any more equipment if it takes five to 10 years to pay for it.”

Frye suspects the latest ruling will have wide-ranging implications for the industry. He believes the state will “go back to the old redemption law,” which prohibited amusement machine operators from offering prizes worth more than $10.

If that happens, Key Master-style arcade games that give players a chance, albeit slim, of winning iPads and other electronic devices would be prohibited. So would the crane games that entice players with prizes like jewelry and wristwatches instead of plush animals.

And that’s a problem for small suppliers like Sandhill Amusements. Most restaurants and retailers have lost interest in traditional arcade cabinets. They want games that make money.

Frye appears to be losing interest, too. Or perhaps he’s simply drained after attending more than 50 court hearings related to his video slot machines since 2013.

“I’m 70 years old and I’ve survived two bouts with cancer,” he said. “I’m getting a little tired, to tell you the truth.”